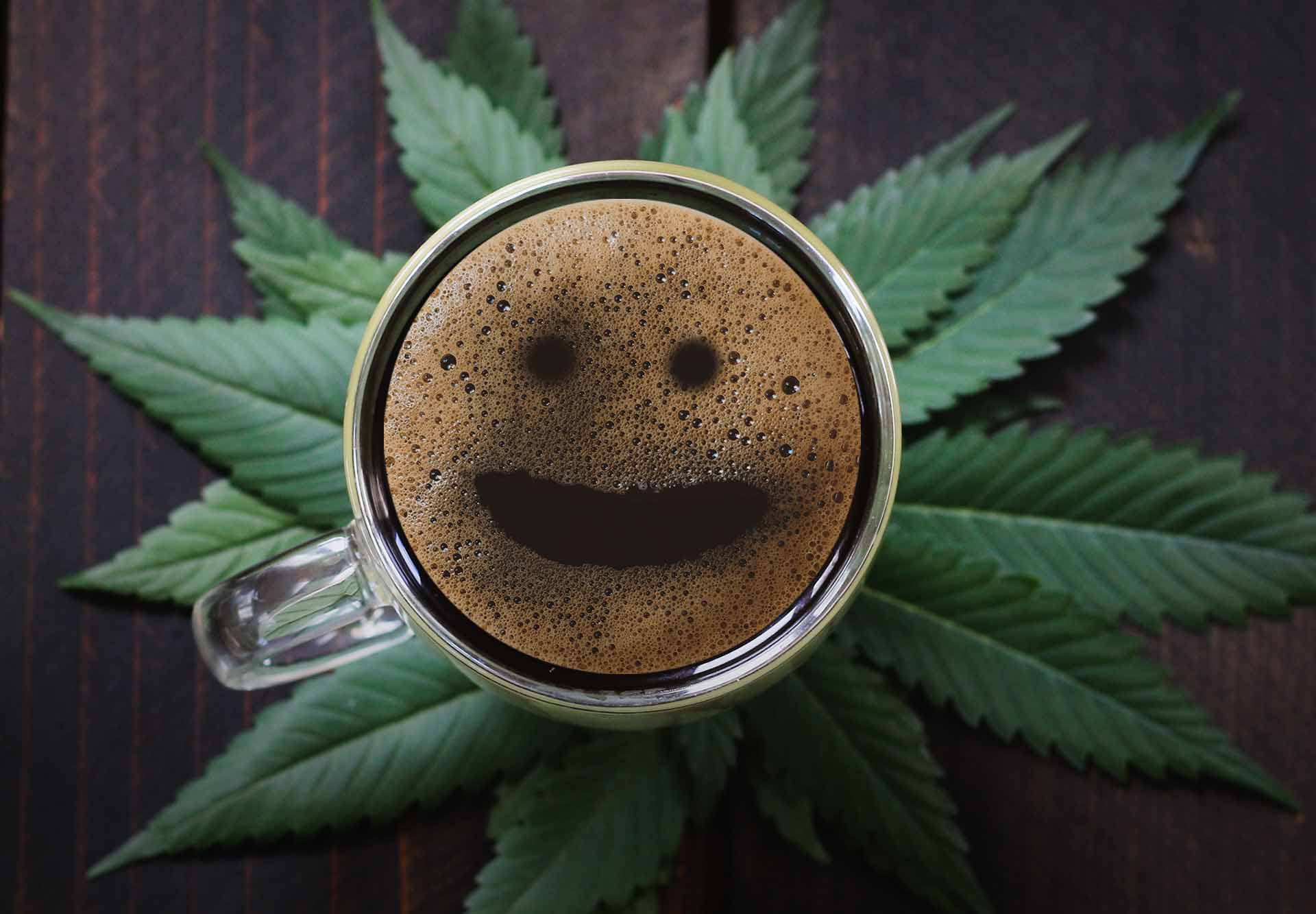 The process of making the perfect cup of coffee can be a relaxing and therapeutic experience – where even just the scent of a fresh brew can provide an energizing lift.1

Some will argue that the same could be said about rolling the perfect joint and enjoying the sweet scent of some quality cannabis. Perhaps this is why both coffee and cannabis have become so deeply entrenched in the daily lives of so many around the world.

As a result, many might wonder if the mix of caffeine and THC makes sense for them. To help answer that, let’s begin by exploring some of the history of coffee and cannabis.

It Seems We Have Goats to Thank for Coffee

According to legend, coffee’s ability to boost mental alertness was first brought to the attention of humans in the 9th century CE. That’s when a goat herder in Ethiopia noticed that his goats became energized and didn’t want to sleep after eating red berries from a certain tree.

He reported his findings to an abbot at the local monastery who made a drink with these berries. The abbot noticed the drink helped him stay alert during the hours of evening prayer so he shared his experience with the other monks, and word about these berries quickly spread.2

History suggests that the Sufis of Yemen were among the first to enjoy coffee outside Ethiopia. They were said to have used coffee as part of their religious and mystic rituals.3

The History of Cannabis Goes Back 10,000 Years

Cannabis was first domesticated in Central Asia more than 10,000 years ago (8,000 BCE). Its use for medicinal purposes can be traced back to 2737 BC. That’s when Emperor Sheng Neng of China was said to prescribe marijuana tea for the treatment of over 100 ailments including gout, rheumatism, malaria, and poor memory.4

The combination of caffeine and THC has been enjoyed since at least 1972. That’s when the first coffee shop, the Mellow Yellow, opened up in Amsterdam. Since then, countless people have enjoyed the calming yet stimulating mix of THC and caffeine – and have come up with creative names for the mix, like Hippie Speedball.

In addition to providing a relaxing yet stimulating buzz, caffeine and THC may offer health benefits. But before we get to that, let’s go over how each can interact with our bodies and minds.

How Do Caffeine and THC Impact Our Health?

Caffeine and delta-9-tetrahydrocannabinol (THC) are both psychotropic substances.

Psychotropic substances have been known to have potential health benefits like helping to treat anxiety, depression, sleep disorders, and schizophrenia.

Although psychotropics like caffeine and THC may provide potential health benefits, they can also present serious side effects depending on things like the strength of the cannabis and coffee, your overall health, and medications you may be taking.

The Effects Will Be Different for All

It is important to keep in mind that caffeine and THC are both natural compounds that will impact everyone differently. That is why it is always a good idea to speak with your doctor before introducing psychotropics into your repertoire.

With that said, here are a few of the effects and benefits each may provide.

Some of Caffeine’s Potential Health Benefits:

Although everyone’s experience with cannabis will be different, the effects of THC generally include:

THC is just one of more than 100 cannabinoids in cannabis. Cannabidiol (CBD) is another. Although more research is needed, current studies suggest that THC, CBD, and other cannabinoids may be helpful in the treatment of a wide range of medical issues.

Cannabinoids like THC and CBD have Shown Potential in the Treatment of:

So what is it about cannabinoids that makes them so effective, where traditional medicine has failed? It could be that our bodies are built to thrive on cannabinoids. Learn more about Cannabinoids here.

Is the Mix of Coffee and Weed Bad?

Since coffee and cannabis may offer so many health benefits on their own, you might think it’s safe to assume that enjoying a little bit of weed with your coffee would be okay. The reality is … it might be safe for most, but not for all.  Here’s why.

THC and coffee can boost the amount of dopamine in our systems. Although dopamine can promote feelings of happiness and euphoria, too much of it at once can trigger anxiety, agitation, and paranoia.

In addition, both caffeine and THC can both increase your blood pressure and heart rate.

Coffee and THC Can Be Dangerous for Some

This is why many doctors advise that those with heart conditions and those at risk of heart arrhythmia or stroke, should not mix caffeine and THC. So, if you’re new to mixing coffee and cannabis, it’s important to consult your doctor to make sure it makes sense for you. If it does, begin with lower amounts of coffee and cannabis than you would normally consume on their own. Then if needed, you can increase your dosage slowly.

It is believed that mixing THC and caffeine may result in an enhanced cannabis experience – with benefits including:

In addition to providing a relaxing effect to go with that caffeine buzz, pairing cannabis with coffee has also been said to help people reach a flow state.

A flow state is defined as an “optimal state of consciousness when our brains begin to quiet down, allowing for an increased sense of wellbeing, an elevated sense of energy, and a spiked increase in concentration.”5

Flow states are said to inspire creativity and boost mental and physical performance.

Here’s some good news for those whose pre-workout routine includes a bit of THC and caffeine. The mix of THC, caffeine, and exercise has been said to help facilitate this flow state.

Another example of a beneficial mixture is the right combination of cannabinoids and terpenes. It’s believed that when you dial in the right mix of the two, it can result in an enhanced cannabis experience – with potential health benefits. This is known as the Entourage Effect.

Learn about the Entourage Effect and how it could be the key to unlocking your body’s natural healing power.

How Does Caffeine Impact the Potency of Your Weed?

Back in 2014, a study was conducted to measure the effects of mixing caffeine and cannabis on squirrel monkeys. The results of this study were published in the Journal of Neuroscience.

Then in 2018, a study led by Marilyn Cornelis at Northwestern University’s Feinberg School of Medicine seemed to back up these findings. This time, the study examined the effects of mixing cannabis and coffee on humans. It found that the more caffeine people consumed, the less cannabis their body was able to metabolize.6

So, although small amounts of caffeine can help your THC go a long way – too much caffeine can lessen its effects.

What to Look Out for When Mixing Cannabis and Coffee

As we said earlier, coffee and THC will impact everyone differently. Since both can increase your heart rate and blood pressure, it is important to begin with lower amounts of coffee and cannabis than you would normally consume on their own. Then, if needed, you can increase your dosage slowly.

A Few Things to Keep in Mind:

Everyone’s experience with medicinal cannabis will vary. Instead of focusing on which strain to medicate with, it’s important to find the right balance of cannabinoids and terpenes that work best with your endocannabinoid system.

Doing so could help to unlock your body’s natural healing power. As part of our commitment to cannabis education, Bloom Medicinals would like to offer you the chance to schedule a free consultation.

During this one-on-one consultation, our patient care specialists will get to know you, your qualifying conditions, medications, dietary restrictions, activity level, and any specific effects you’re seeking, or looking to avoid. By doing so, we can help to identify the consumption methods and forms of cannabis that are best for you!

Take the first step toward an improved quality of life by calling to schedule your free consultation at a Bloom Medicinals dispensary near you!