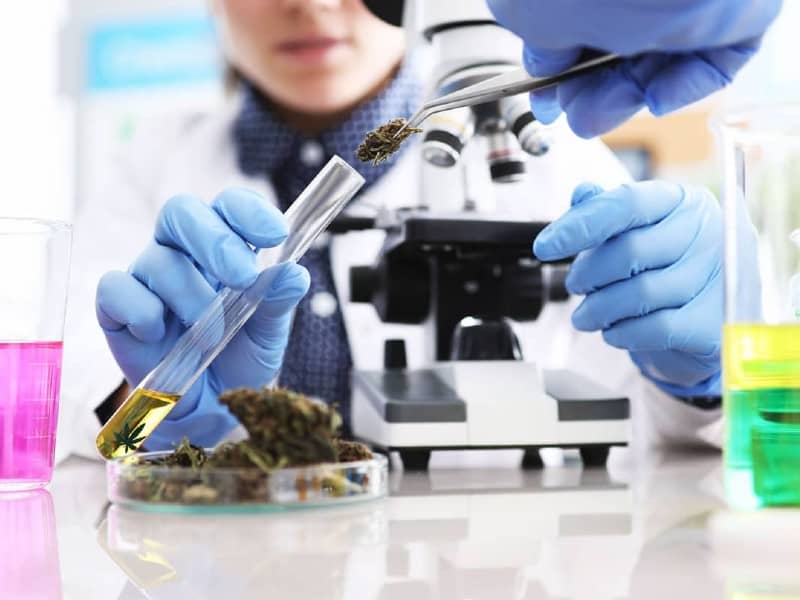 Italian cannabis researchers from the University of Modena and Reggio Emilia, the University of Rome, the University of Campania and the Institute of Nanotechnology in Leece, announced the discovery of two new cannabinoids; THCP and CBDP. In this article I will explain their structure and function, and discuss the ramifications of this newest discovery.

The discovery of THCP and CBDP was published in Scientific Reports on December 30, 2019. The study was conducted by Cinzia Citti, Pasquale Linciano and Giuseppe Cannazza. The researchers analyzed FM2, ethanolic, a low-THC variety of cannabis which was supplied by the Military Chemical Pharmaceutical Institute, Florence.

Chemical Structure of THCP vs THC

However, this does not necessarily mean that THCP is 30 times stronger than THC. The study was originally conducted in a laboratory followed by the use of mice models. The results indicated that THCP has similar effects of potency and therapeutic benefits to that of THC, but at approximately half the dosage. However, no human trials have been conducted as of yet. This means that the Italian team has no information on how potent THCP is for humans. It is also unknown if there are strains of cannabis that contain different levels of THCP.

Similarly, CBDP has a side chain of seven links compared to the five link side chain of CBD. It is already well-documented that CBD does not bind well to either CB1 or CB2 receptors. It is unlikely that the addition of the two more links would change its effectiveness in binding, so researchers are focusing much more on THCP. However, researchers have not ruled out that the CBDP may be more potent than is currently thought.

What This Discovery Means

The discovery of THCP may shed some light on why different people react so differently to equal doses of THC. While researchers have previously attributed the psychotropic effects of cannabis to THC, they are now reassessing this hypothesis. It seems possible that the psychoactivity is partly due to THCP or some other unknown cannabinoid.

Dr. Cannazza pointed out that the focus of that of his team is to identify and characterize the many unknown compounds in the cannabis plants. They are leaving it up to other scientists to assess their therapeutic value.

Dr. Cannazza’s research team was able to identify THCB and CBDB, with their four side link chains, which they discovered last year. The focus of their subsequent research will be to investigate other minor cannabinoids such as CBGB, CBGP, CBCB, CBCP, etc.

The team used a technique called metabolomics, which incorporates mass spectronomy and chromatography, in order to provide a molecular imprint of the FM2 strain. Metabolomics is the scientific study of chemical processes involving metabolites, the small molecule substrates, intermediates and products of metabolism. Each individual’s metabolome helps identify their response to stimuli, to an active disease or to a treatment. It consists of amino acids, organic acids, sugars, lipids, hormones and exogenous metabolites that come from the food, the environment or the microbes in our gastric system which affect our health.

It can be used to analyze patient samples which provide a crucial baseline assessment that can be compared to samples taken 1 day, 1 week and even 1 month after treatment begins to provide biochemical evidence of how the body responds to treatment. If there are no changes detected, a new protocol may be tried to improve the response.

With advancements in technology as a valuable tool, mass spectrometry is currently being employed to identify unknown compounds in cannabis. It is an analytical technique which is used to quantify known materials while pinpointing unknown compounds within a given sample. It also clarifies the chemical and structural properties of different molecules.

The role that mass spectrometry plays regarding safety in cannabis testing includes the analysis of pesticide residue, the levels of heavy metals and the mycotoxins from bacteria. It is also used to assess the potency of the cannabinoids and the terpene profiles.

Medicinal Benefits of THCP and CBDP

The potential medicinal benefits of THCP and CBDP are not known at this time, but Dr. Cannazza and his team believe that further research should be done on THCP to determine its pharmacological effects on patients. Another member of the team, Dr. Citti, is certain that both THCP and CBDP have important medical applications, but that further investigation is needed to understand not only the benefits but the risks in using these cannabinoids. He foresees the development of THCP-rich cannabis varieties in the future once the pharmacological profile of THCP is determined.

Dr. Citti envisions the next step in the process of looking for these cannabinoids in already exisiting cannabis varieties. By analyzing their exact concentrations, researchers will have the necessary information to evaluate their effects on patients. This is a long-term project in which many pharmacological tests will be required to assess the benefits and risks of THCP and CBDP. Don’t expect to see THCP-rich cannabis varieties on dispensary shelves, any time soon.